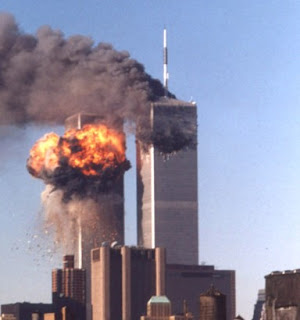 A MESSAGE FROM THE PASTOR

Grace and peace to you from God our Father and our Lord Jesus Christ.

Ten years ago, Robin was early in her pregnancy with Henry.   I was working in offices at the Port of Elizabeth in New Jersey commuting an hour each way from our home in central New Jersey.   My sister lives in Westfield, New Jersey and commuted to Manhattan daily.   My good friend Michael live and worked in Brooklyn, and his girlfriend Jayne worked sometimes "in the city", that is Manhattan.  Ten years ago, the day started off normally.   After 9/11, it was very different.   I could talk for hours about that day.   I could tell you about the phone call from Robin that told me about what was happening.   I could tell you about running around the warehouse and looking east where I could look over the Hudson River and see the twin towers belching smoke like two factory smokestacks.   I looked again after the first one collapsed, and a heavy could of dust and smoke completely obscured the other.   The skies completely void of any commercial airline traffic were disturbingly eerie.

We finally heard from my sister whose commute had a subway stop underneath the World Trade Center.   When her train had come up on the Manhattan side, the conductor tol them that this train was going no further into the city and was returning to NJ.   She went with it.   At my office, we watched a Spanish-speaking network.   It broadcast from he Empire State Building while the major English-speaking networks could not broadcast sin their towers were at the top of the WTC.   At mid-day, I went home down the Garden State Parkway.   Curiously, there was little traffic heading south.   And except for the occasional fire truck or EMS vehicle, noting at all was heading north to the city.   Everyone living in and around New York City on September 11, 2001 has a story to tell about that day and the way life became afterward.

There had been a well-publicized story of people trapped on an elevator; they had gotten the door open, but had to dig through ten layers of drywall to break out of the elevator shaft.   For months (years? still?) my sister carried a bottle of water and a Leatherman knife/tool in her bag when she went into the city.   I had business travel to Paris during the whole era of "freedom fries" and the "axis of weasels" as the US began to move the war from Afghanistan to Iraq.  I go off the plan with both fists cocked.   But the Parisians I met were gracious, kind, and proud of their home--one of the most beautiful cities in the world.   Years later in a chaplains' group discussion, a discussion facilitator asked us to raise our hand if we were part of a minority.   My friend of mid-eastern descent raised his hand.  The facilitator asked if that really counted.   My friend replied, "you better believe it did on September 12th."   Ultimately, Robin and I knew no one that died that day, but we knew people who knew someone who died.   And everyone knew someone that knew someone that had been lost.

An internet bulletin board for ELCA clergy has been batting around "what to do" regarding the tenth anniversary of 9/11.  Some pastors want to talk about our violent world.   Some want to make prayer remembrance liturgies for church that Sunday.   Some want to be critical of American responses.   Some want to talk about forgiveness.   But I think I know what I will do that day.    I will come to church that morning.    That evening I will watch a bunch of programs about 9/11.   And sometime that day, I am going to call my sister.


Posted by Pastor Lance Henderson at 8:13 AM

Pastor Lance Henderson
I am a second career pastor who began ministry in 2009 after receiving my M.Div. from Lutheran Theological Southern Seminary. My previous career was in chemical sales. I am married with two children. I am a native Texan, but have lived in NY, VA, NJ and now SC. I was baptized as a Presbyterian, but I have been a Lutheran as long as I can recall.