Today is the last Sunday of the Christian Year. Christ the King Sunday!

THIS guy does not qualify to be King 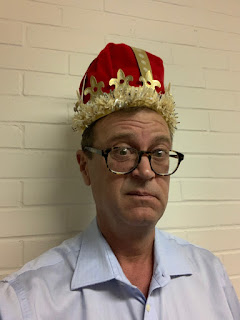 HERE is the full worship service from FaceBook live, edited some and put on our YouTube channel

HERE is the audio version of the sermon.    The sermon is on Ephesians 1:15-23 which did not get recorded.   So read that first.

Posted by Pastor Lance Henderson at 1:51 PM No comments:

After a week on vacation, Back in the saddle!

Last Sunday I was visiting friends in Texas.   See if you can tell which one is me?   HINT:  I am the one with the BIGGIEST goofy smile. 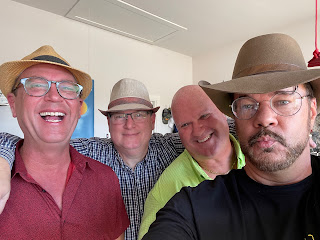 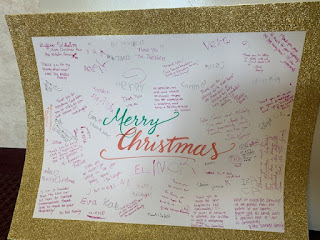 If you want just to hear the audio of the sermon

Thanks for reading and subscribing

Posted by Pastor Lance Henderson at 2:21 PM No comments:

It's All Saints Sunday.   A special one for me as we lit a candle and pealed a bell for my mother who passed in April.

For the Audio version of the sermon, CLICK HERE

For the Full worship service on video with great All Saints Sunday music at the postlude, Click Here

Posted by Pastor Lance Henderson at 1:11 PM No comments:

Reformation Day is a tough one for me.    The Roman Catholic Church needed some serious correction, but some unity lost was the cost.

My Sermon on Audio, Listen HERE 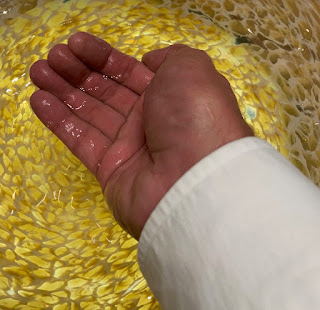 Posted by Pastor Lance Henderson at 12:50 PM No comments:

My sermon from October 18, 2020.  Some poor soul decided to leave some political flyers on my door for distribution at my church.    Bad idea.   For the audio version of only my sermon, click HERE.  For an uploaded video version of our complete service, click THIS LINK

Posted by Pastor Lance Henderson at 12:45 PM No comments:

Numbers are so important, there is a book of the Bible named after them.

We've obviously been doing a lot online at Our Saviour Lutheran.    To what ends?   My October newsletter article may shed some light on that question.

Grace and Peace to you from God our Father and our Lord Jesus Christ!

“I wonder what Pastor Lance does these days?’

No one has asked me that directly, but it IS a valid question a congregation should ask of its pastor during these weird times.    Of course, I’m spending a LOT of time working on online work.    If you have been getting your Grapevine issues over the past few months, you should know that.  But a second question is—is it worth is it?

Well, let’s look at some numbers.   For a few decades, the media and academy around the church has been pretty dim on the notion of numbers.   They have said things like “American churches are too focused on the number of rumps they are putting in the pews and how many bucks are going in the offering plate.   They OUGHT to be focusing on _____!”   You can fill in the blank with a thousand different things—social justice, discipleship, you name it.

But I’ll disagree.   As Pastor Mel from the bishop’s office told a bunch of us seminarians heading out to calls.  “Numbers ARE important.   So important that God named a book of the Bible after them!”  Cute, but also true.   Numbers aren’t the be all, end all.   But they tell us important things.   Would you be impressed if the name of the story“ was Jesus feeds a bunch of people” rather than “Jesus feeds the 5000”?  Why does Luke write that after Peter preached three thousand were baptized (Acts 2) and that about 5000 came to believe some time later (Acts 4)?   Numbers are important in telling a story.

So let us consider the story of this congregation and how it touches the hearts and minds of people in our proclamation of the Good News.   And let’s roll the clocks back to this time last year in 2019 or even 2018.

Now let us say (even though we know there is some overlap in the actual people) that those events are called “touches”.  So this congregation was making an average of 72 touches per week.

Posted by Pastor Lance Henderson at 12:42 PM No comments:

A story about a landowner sending his servants first and finally his Son to retrieve what is owed him is the basis of this sermon (Matthew 21:-33-46) .    If you want to see the entire service on our YouTube channel, click HERE

If you are looking for just the audio of the sermon, click HERE 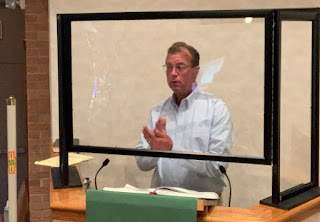 Posted by Pastor Lance Henderson at 12:36 PM No comments:

Pastor Lance Henderson
I am a second career pastor who began ministry in 2009 after receiving my M.Div. from Lutheran Theological Southern Seminary. My previous career was in chemical sales. I am married with two children. I am a native Texan, but have lived in NY, VA, NJ and now SC. I was baptized as a Presbyterian, but I have been a Lutheran as long as I can recall.